I have read that you developed the distance standard in the 70’s. Has this been abandoned or changed to allow the ball to go farther? If not, why is the USGA is talking about rolling the ball back? I don’t understand.

Thank you for your question.

I too am a little puzzled by the discussion about rolling the ball back as neither I nor do 99% of the golfing population, hit the ball far enough. Nor have I heard of anybody giving up the game because they hit the ball too far.

I doubt that there is a single golf course played by 99% of golfers, that is outmoded for them by advances in equipment technology over the last 50 to 75 years. So, this is the reason why I am a little puzzled by the discussion.

Yes, the average driving distance the touring pros – less than .001% of the golfing population — hit the ball today compared to the 1960’s has increased by less than 40-yards. This was mainly due to the introduction of the titanium driver, which made it possible to obtain “optimum launch conditions” for balls based on their aerodynamic properties, as well as take advantage of the properties of the two-piece – now three- or four-piece – ball called the Pinnacle in the 70s. The “spring-like effect” in club faces and the larger MOI also contributed to the increase  in distance (see graph below, from 1995 when the titanium club with spring-like effect was introduced until 2003 when most Tour players had optimized their launch conditions and switched to the multilayered ball). 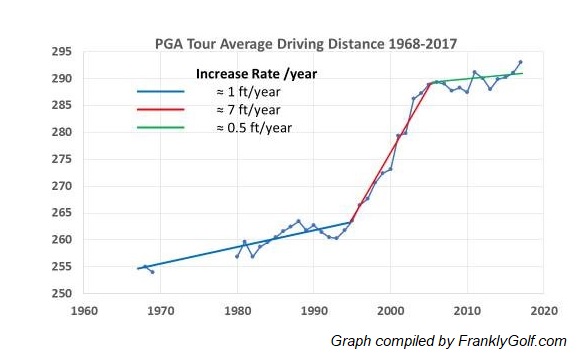 Surely it seems obvious that by continuing to lengthen courses for the PGA Tour and major championships is wrong headed, as this only plays into the hands of the long hitter and diminishes the all-round skills required to excel. This too encourages the elite golfers to hit the ball  as hard as they can as long as the penalty for a wayward drive is not too severe.

However, we should recognize that these long drives are good for the entertainment value and do increase TV ratings, so the PGA Tour are not interested in rolling the ball back or shortening golf courses to challenge all the skills required to be a champion golfer.

Lou, YES, I was instrumental in the development of the Overall Distance Standard (ODS) in 1975 and even though this has been updated, to my knowledge, no ball used today has failed the ODS.

This is why I too am confused at the discussion about rolling the ball back, due to the concomitant pitfalls in an attempt to solve a problem to which there are other less disruptive solutions, most of which will be opposed by those who gain from the entertainment value of televised golf.

Please let me and other Frankly Friends know how you feel about rolling the ball back, by replying below.

12 thoughts on “Rolling the Ball Back”